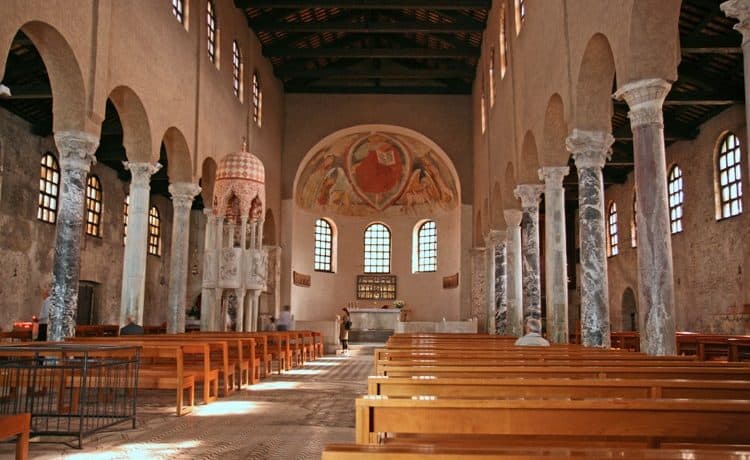 By ghotels Comments are Off

The Basilica of Santa Eufemia, characterized by early Christian buildings, stands in the splendid setting of Campo dei Patriarchi in the “old town” in Grado.

Nearby you will also find the fifteenth-century bell tower characterized by the Anzolo San Michele which represents the symbol of Grado; the Baptistery; the Lapidary e the Basilica of Santa Maria della Grazie, the oldest in all the town.

The origins of the basilica are very ancient. In fact, from the fourth century there was already the “small basilica of Petrus“, on which Niceta laid the foundations for a new church in the early fifth century.

The new building, however, was completed in 579 by the bishop Elia who now resided permanently in Grado. Elia dedicated the basilica to the Aquileian protomartyrs Ermacora, Fortunato and Eufemia (martyr of Chalcedon), in such a way as to reaffirm the full fidelity of the Church of Aquileia to the anti-Arian resolutions of the Council of Chalcedon.

The interior of the basilica is structured in three naves on columns with capitals that support the arches.

In the apse basin you will find a large fresco depicting Christ in an almond, surrounded by the symbols of the Evangelists, the Madonna, Santa Ermacora, San Giovanni Battista and San Fortunato.

Above the altar it will not be difficult for you to identify the gilded silver altarpiece, a masterpiece of the Venetian goldsmith’s art, Donato Mazzalorsa.
You will be fascinated by the 11th century pulpit, supported by six columns with foliated capitals covered with reliefs depicting the symbols of the Evangelists and a cross. The pulpit is also covered with a Moorish-style dome on inflected trefoil arches (most likely an addition from the Gothic period).

n the left aisle you can appreciate the “trichora“, a cell similar in shape to the chapel of San Marco, while in the right aisle the mausoleum that preserves original parts such as the brick vault and the mosaic, in which the monogram of Elia stands out (HELIAS EPISCOPUS) . The safe that holds the treasure of the Cathedral is walled up on the wall.

Thanks to the restorations made over the years, you too can travel the journey of the catechumens through the floor mosaics, where there is also a mosaic representing the “Castrum of Grado”

The floor of the Cathedral is very similar to the Byzantine stylistic canons (schematic and geometric), the most famous motif is that of the underwater wave. The mosaics also have a significant value, proven by the approximately 40 epigraphs they commemorate, the name of those who contributed to the expenses for the realization. 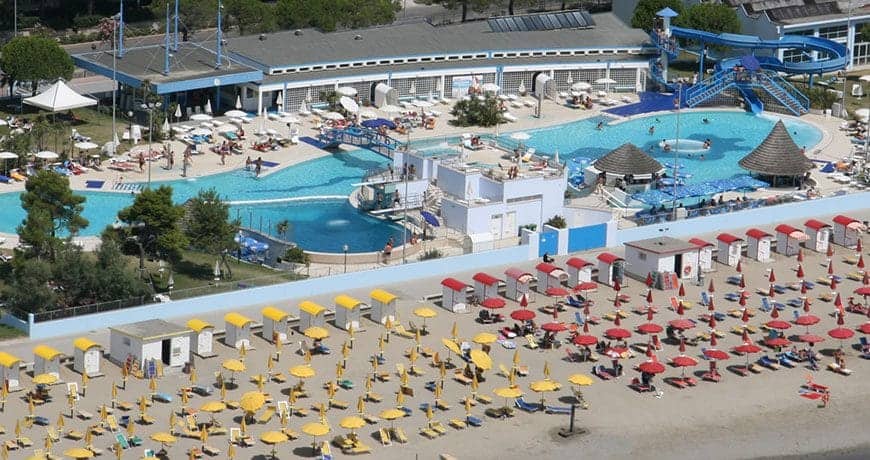 The beach is embraced by an inviting and refreshing green area; a clean sea that can boast since 1989 the Blue Fee Flag, which is a guarantee of the purity of the water and high quality services. A seabed that is shallow, clean, calm and that gradually descends where the whole family can relax and children can play. A team of lifeguards is on the beach to ensure attention and safety. Booths and beach umbrellas are located along the entire stretch of sand.

Daily fees and subscriptions are available here. Bar, buffet and children’s playgrounds are located in the most strategic locations to appeal to all tastes. Ambient-temperature and solar-hot-water showers, toilets and several amusement areas are available throughout.

The large “Parco delle Rose” ( Roses Park ) is located near the beach and provides relief on scorching hot days.

Gym facilities and children’s entertainment are included in the admission ticket.
Events and happy hours are organized during the entire summer season. There are large areas where children can play and be entertained. There is a reading area with national and international newspapers, an area where cultural events take place.
There is a buffet restaurant and there are some snack bars throughout the beach.

Grado, the sea and the nature

In Grado everyday the sea and the nature give you different choices.

The richness of the sea, water’s element low in mineral content, the sand, the climate and its splendid lagoon, made it, with the time, to one of the most famous destination for bathing a thermal cures. One vacation to the standard of the quality of the life. Choose Grado to relax and to enjoy! A throb in the water’s sea or in the green of the city.

Do you want to move into history and culture?
Grado is the isle you need: the ancient Basilica, the roman mosaics.
Not so far from Grado is situated Aquileia: one of the most important cities of the Roman Empire.

Behind the roman historical centre there is the Grado’s lagoon with its unblemished nature and its unchangeable fascination.
To appreciate are the Water sports, the typical gastronomy and the fisherman’s traditions.
In Grado the sea is an emotion to 306°.

This online booking service is run by Nozio and assures safe money transactions.